The robotic video cameras are the separate type of devices which are not popular among general consumers and are used mainly on large video surveillance objects – large supermarkets, car parks, and warehouses – places where the budget spent on such video camera fully justifies its installation. Indeed, the cost of the majority of such models from well-known manufacturers is more than 1000 – 1500 USD.

But the market has a small niche of similar devices for public, home, and office video surveillance. These modes are usually intended for indoor use and the camera module is equipped with a servo mechanism allowing you to turn and tilt the camera remotely at rather large angles. The functionality of such models is at the level of common IP cameras with additional possibilities PT (turn and tilt). Meanwhile, the cost of such video cameras is not higher than the cost of indoor and outdoor IP cameras.

One of the so interesting models is our new video camera Partizan Cloud Robot (IPH-1SP-IR) with the support of Partizan Cloud storage technology. Let’s examine this camera, its functions and how useful will be the PT-technology for indoor usage of the camera.

By tradition, let’s start our review from the packaging, packaging arrangements and design of the device.

The model Partizan Cloud Robot (IPH-1SP-IR) is supplied in a white-blue cardboard box made in attractive modern design. The box contains the information about the product in six languages including Ukrainian, as well as a small list of advantages of the model, such as fast connection to the cloud, the safety of data storage in the cloud, 100% compatibility of software and hardware characteristics and so on. 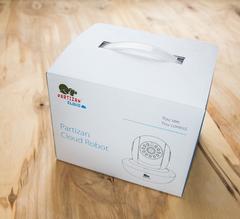 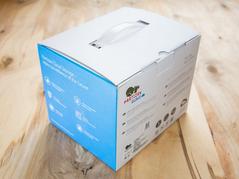 In general, the packaging makes a pleasant impression, it doesn’t contain the inscription in Chinese or advertising of non-existent functions – everything is concise and honest. There is also a plastic box on the box for easy camera carrying in hands.

But more important is what this box includes. Unpacking the box, you can find the following: 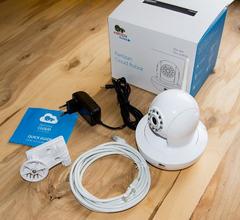 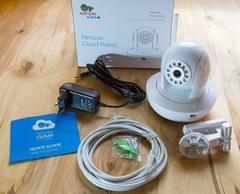 – a brochure with a schematic guide on the quick connection of the video camera; 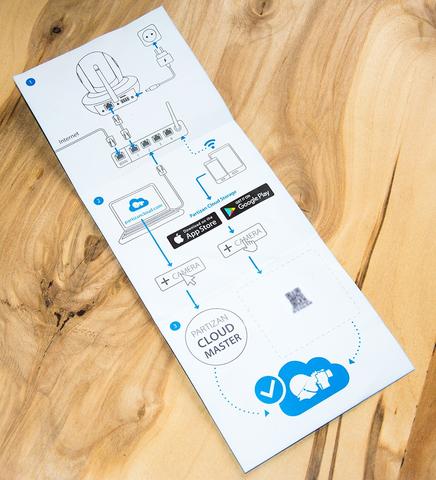 – a small plastic bracket for wall or ceiling mounting; 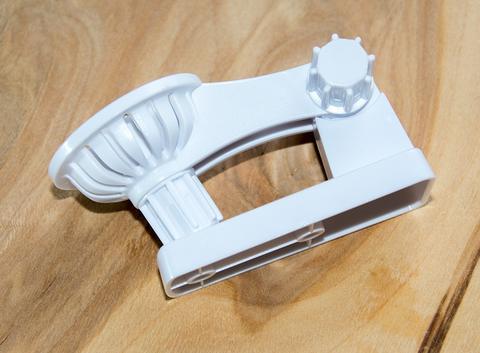 – a standard mounting kit of dowels and screws; 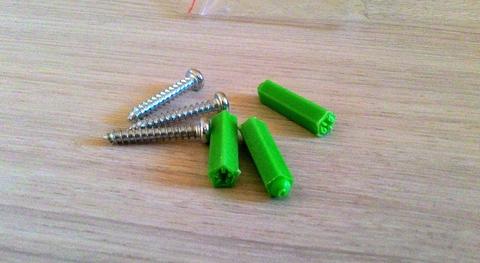 – a network cable (patch cord) for connecting the camera to the router. By the way, it as a rather convenient thing and only a few producers include such accessories into the standard packaging arrangement; 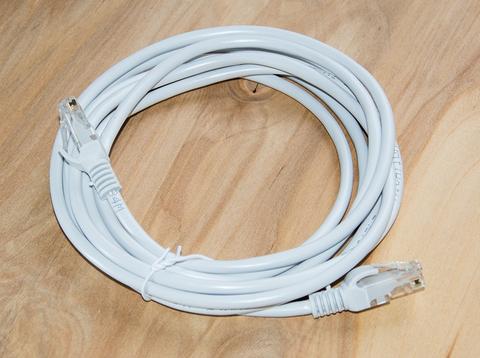 – 5 V power supply, which is also a very useful addition. The competing model of another company has no power supply included in the packaging, and as there is not used a standard 12 V but 12 V power supply, and even with unusual socket, it will be very difficult to find this to the camera of our competitors; 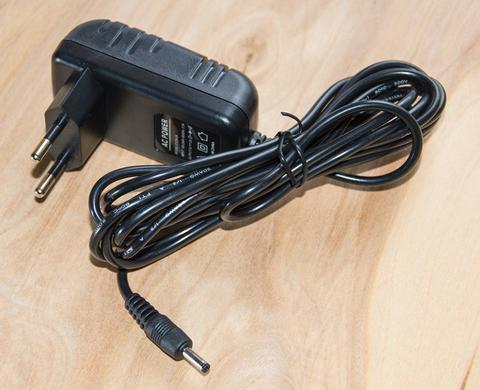 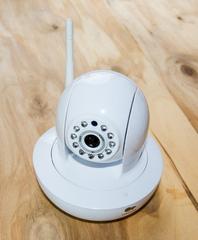 The video camera looks modern and the design with the absence of sharp corners looks attractive. The housing material is milky white glossy plastic. The device seems to consist of two parts– the camera module with the lens and illumination, made in the form of a truncated ball on both sides and a base with a built-in turn/tilt drive. The base also includes a built-in microphone, switching ports and a speaker. There is also a Wi-Fi antenna for wireless data transmission and receiving.

Let’s examine the technical characteristics of the model in details. The Partizan Cloud Robot (IPH-1SP-IR) video camera has a 1/4” OmniVision matrix that can record at 1280х720 pixels (1 Mp) and is designed for shooting frequency of about 25 frames per second. 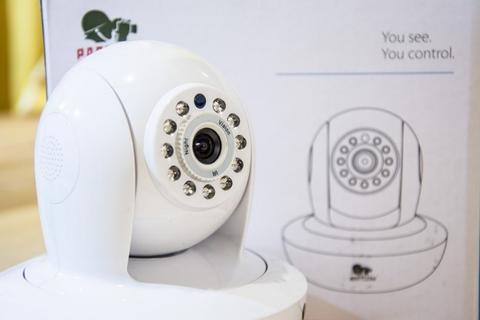 It will be more than enough for most video shooting tasks in small rooms. First of all, this model is designed for shooting large objects, faces, for motion detection and it can not be able to cope with a clear video recording of small objects, texts, etc. That’s why buying this video camera do not expect to receive a ultra-clear FullHD video of microscopic parts. But this model copes well with the most of the standard tasks: for example, to monitor the work of employees in the office or shop, to monitor the situation in the kitchen or in the halls of the restaurant, to monitor remotely the children or animals at home. 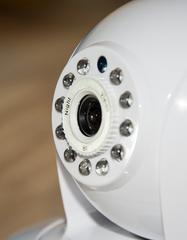 The focus length of the video camera is standard 3.6 mm; it is a wide-angle universal lens with viewing angles of 59° horizontally and 40° vertically. The number of spherical lens aperture is 1.2, the attachment to the module is also standards – М12. Of course, the main advantage is the ability to control the lens and shooting. The rotation angle of the camera module is up to 355° horizontally and 120° vertically, and with a wide viewing angle, this ensures the absence of dead zones in the room.

There are 11 LED infrared lights around the lens and the light sensor. The range of the illumination is about 15 meters; the length of the wave is 850 nm. The transitions from the «Day/Night» modes can be performed in both automatic mode and manual mode with the help of video camera menu. The illumination works correctly in the darkness, the lack of light isn’t seen when using it in small and medium rooms. 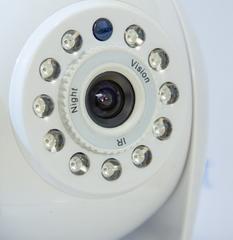 In practice, the standard image settings operate correctly: the colors are natural, and brightness contrast and sharpness of the image are at the optimal level for different light sources. These parameters are to be adjusted only as a last resort and it is better to do it under the professionals’ supervision. There also exists the possibility for professionals to adjust manually the balance parameters of white color, intention of a weak signal, balancing of exposures, privacy masks, and other functions. 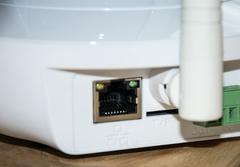 The communication possibilities are represented by wireless Wi-Fi technology and a standard network LAN-port RJ-45. When connecting the video camera to the network, its detection is performed quickly and without any problems: almost all the adjustment is made either in the interactive or automatic mode.

Near the network port and Wi-Fi antenna, there is a power connector and alarm input and output terminal block for connecting additional security devices to the camera. All interfaces are perfectly combined and there exist no problem during the connection and configuration. 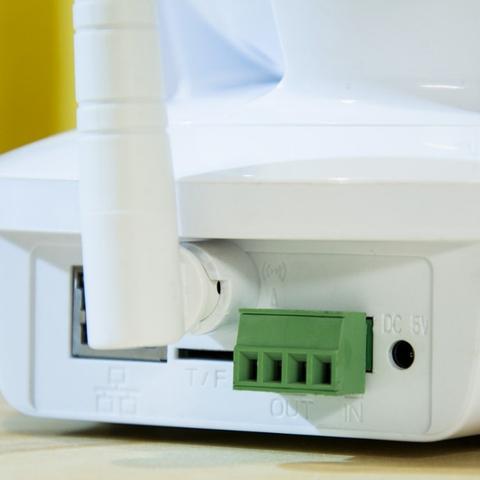 In general, the ergonomics and design of the video camera are at a high level, especially taking into account its low cost. The size of the video camera is quite compact, its dimensions are 148 mm in height and 128 mm in diameter and the mass is about 360 grams. Its light weight allows you to mount the device on the ceiling or wall with the help of packaged bracket. 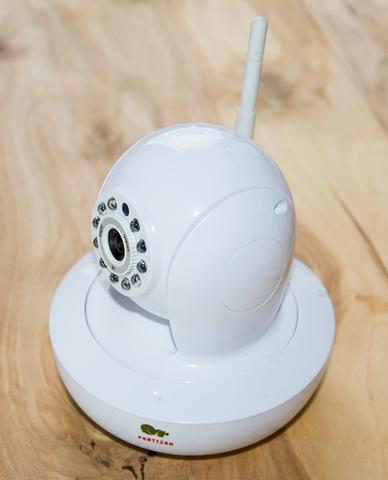 Despite the indoor usage, the model has the housing protection in accordance with the standard IP44 from penetration of the objects about 1 mm and multidirectional splashes of water inside the video camera. The camera shows the best operating results in the temperature range from 10°C to 55°C, it is not recommended to use the device at lower or higher temperature values.